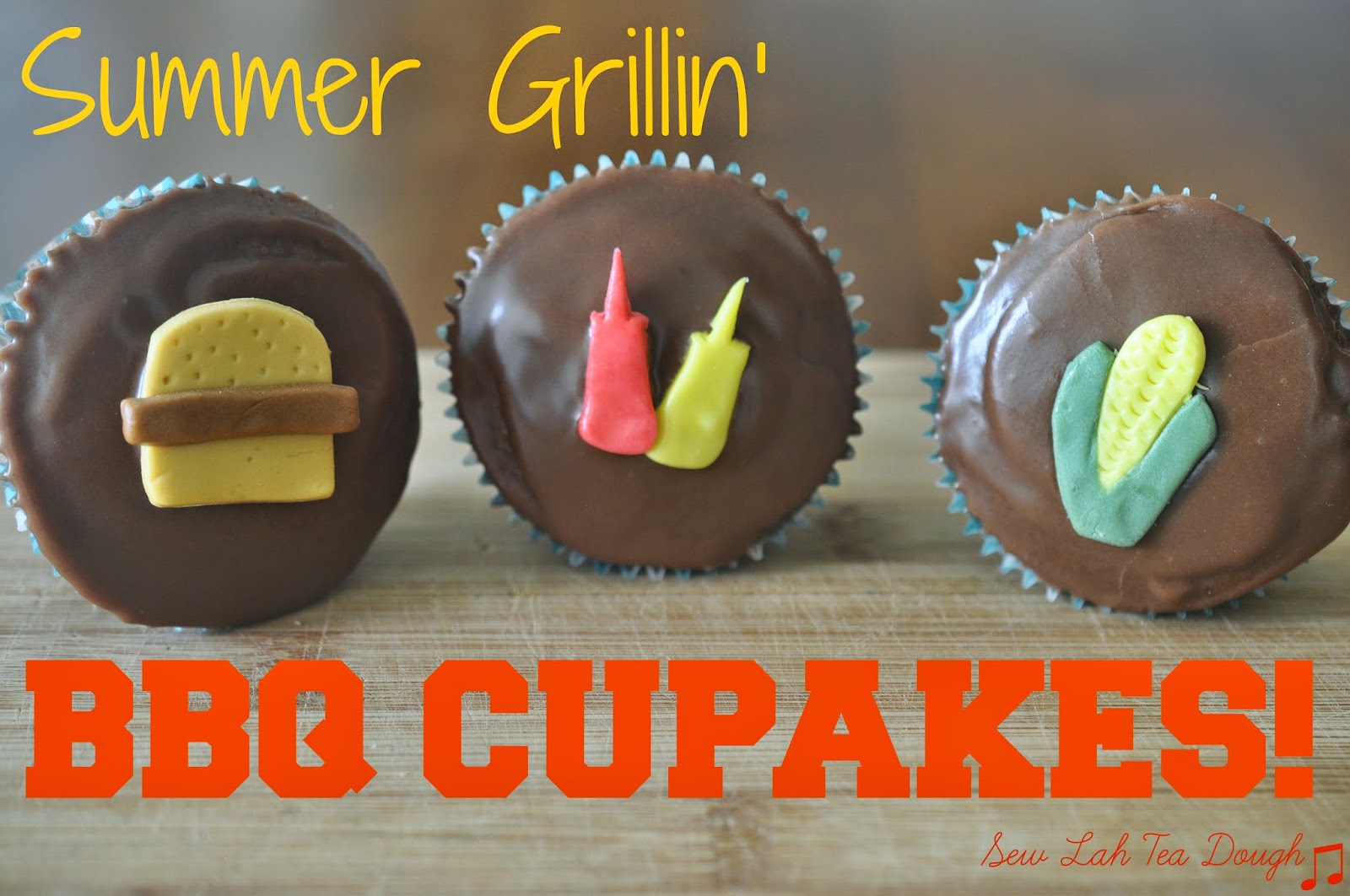 Summer is here and it is most definitely BBQ season!.. More than it usually is in our house anyway!
We celebrated our friend's 30th birthday the other day with lots of delicious bbq food and a great evening, topped with a donut tower birthday cake (what a great birthday when it lands on National Donut Day!), cake and then also more cupcakes from me!  Perfect!
I went with the BBQ theme seeing as that's what we were going for, and it is the season after all! 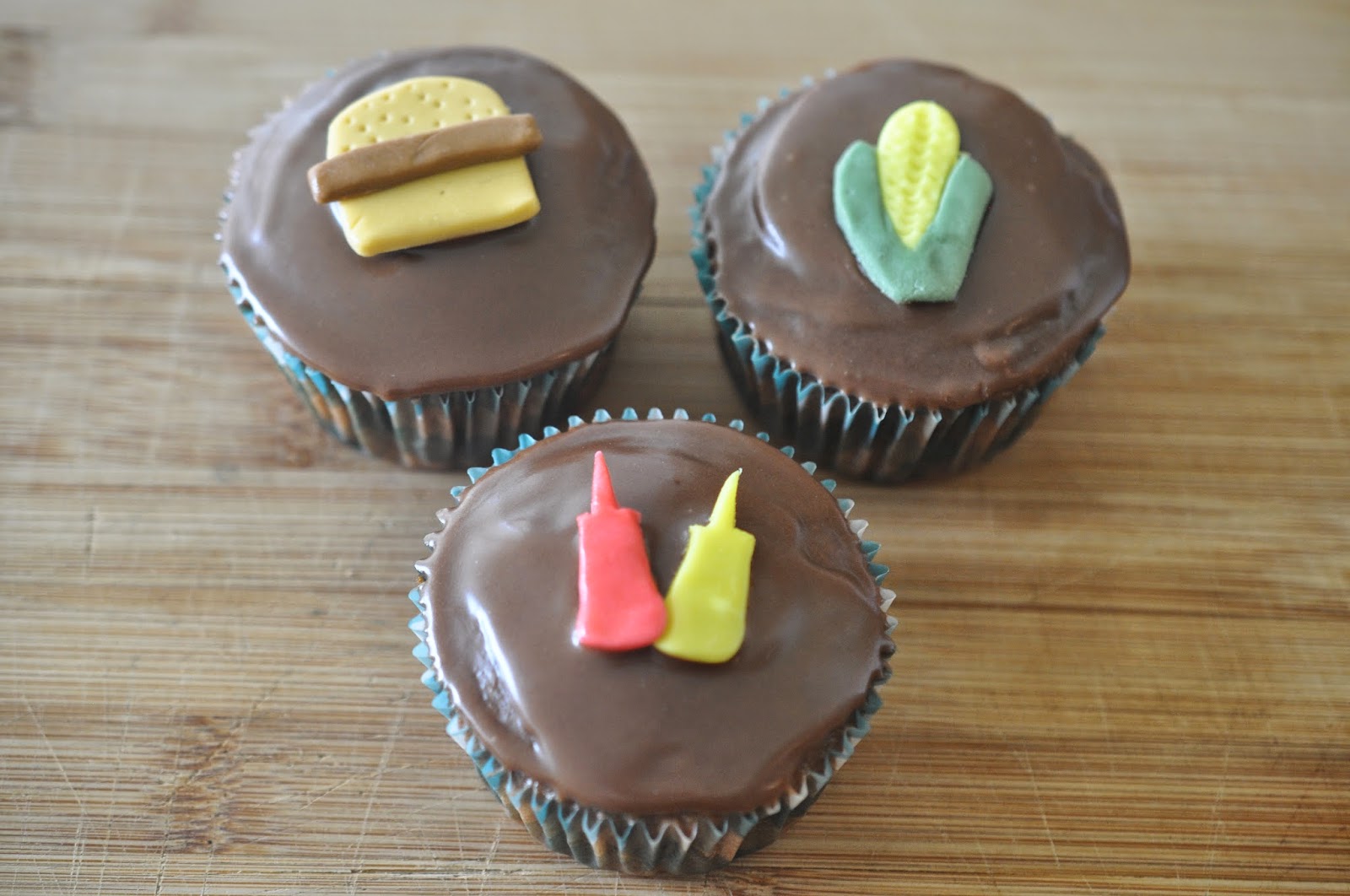 Using the same recipe for Coca-Cola Cupcakes as my New Home Cupcakes over a year ago, I thought it was time to use this recipe again, especially as the birthday boy is a fellow coke lover.  They're a little different to regular "cupcakes", with a super dense cake part, and a delicious glaze - with no swirl of buttercream.  This meant I wanted cupcake toppers that were flat, 2D rather than 3D ones so it would lay flat on the surface of the cupcake glaze.
So I got to work creating the BBQ themed fondant cupcake toppers.  First up were the burgers.  These were my first idea, and the one I definitely knew how it should look.  I coloured small amounts of fondant a brown colour for the burger, and then a yellow-brown colour for the bun, and used a sharp end of a cake decorating tool to make little "sesame seed" indents. 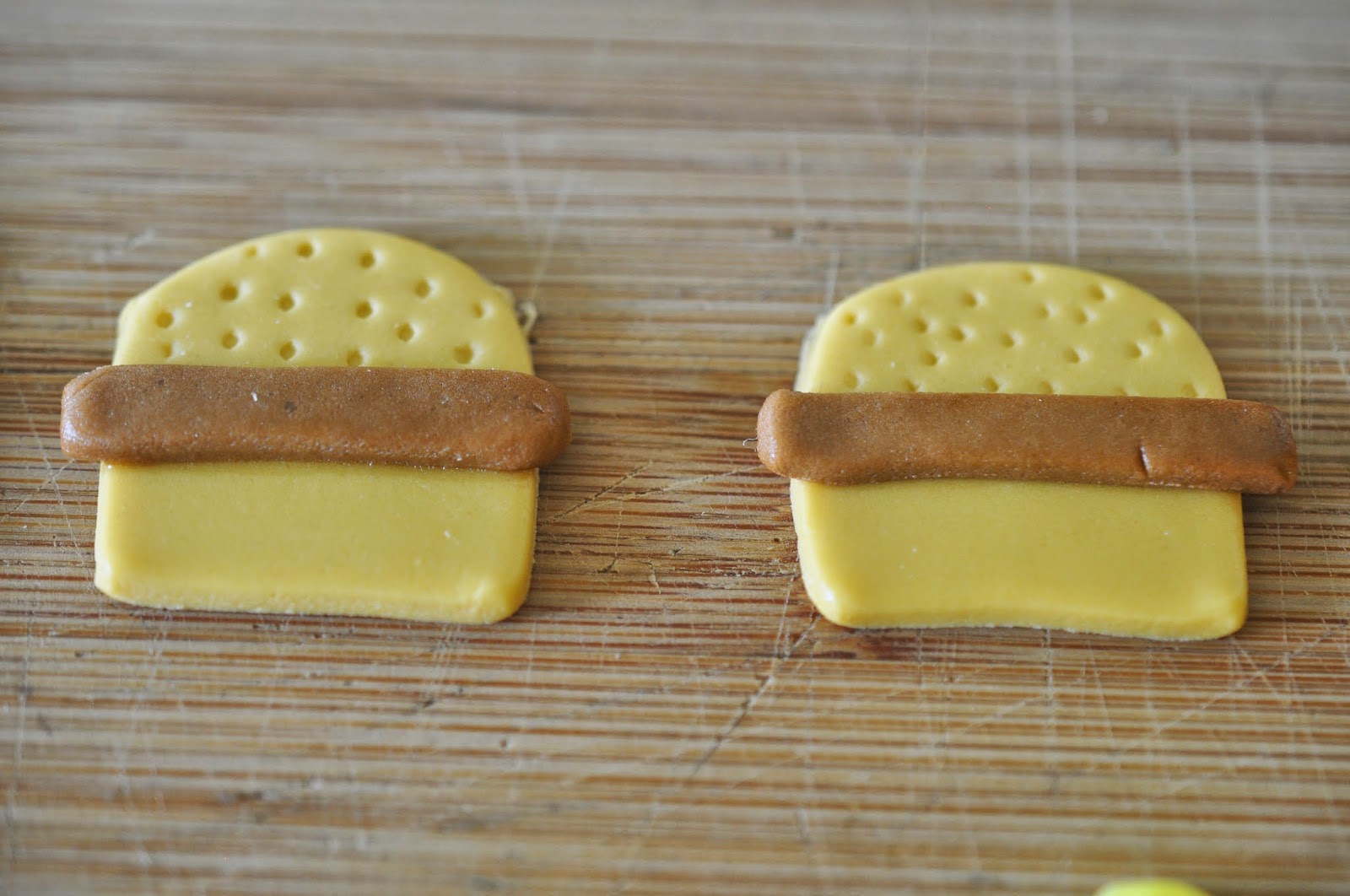 Next was the ketchup and mustard!  A little out of scale compared to the burger, but who wouldn't rather have a big burger!? 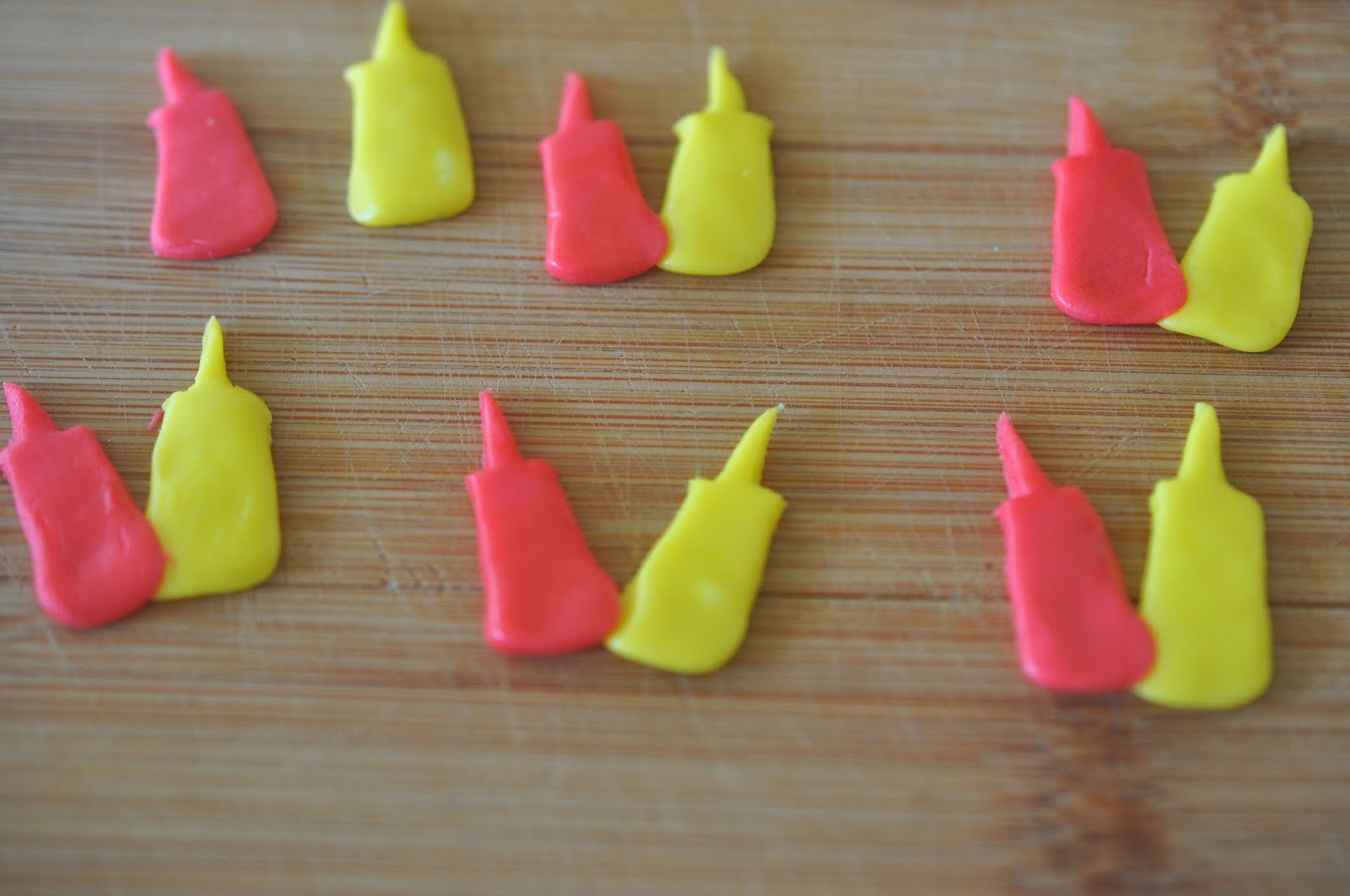 Then the choice was between making a '30' cupcake with some birthday decorations, or doing a third BBQ topper.  I went for a third design on the same theme, tying it all together with some corn!  Green and yellow fondant coloured and then cut out with various parts of cookie cutters to get the shapes and sizes I wanted.  The green part came from a maple leaf cutter, and the corn part from the little finger on a high-five hand cookie cutter.  Just using what I had instead of free-styling the cutting!  Then I used the end of a cake decorating tool that looks like a scalloped shell on the end to create the texture of corn.﻿
﻿ 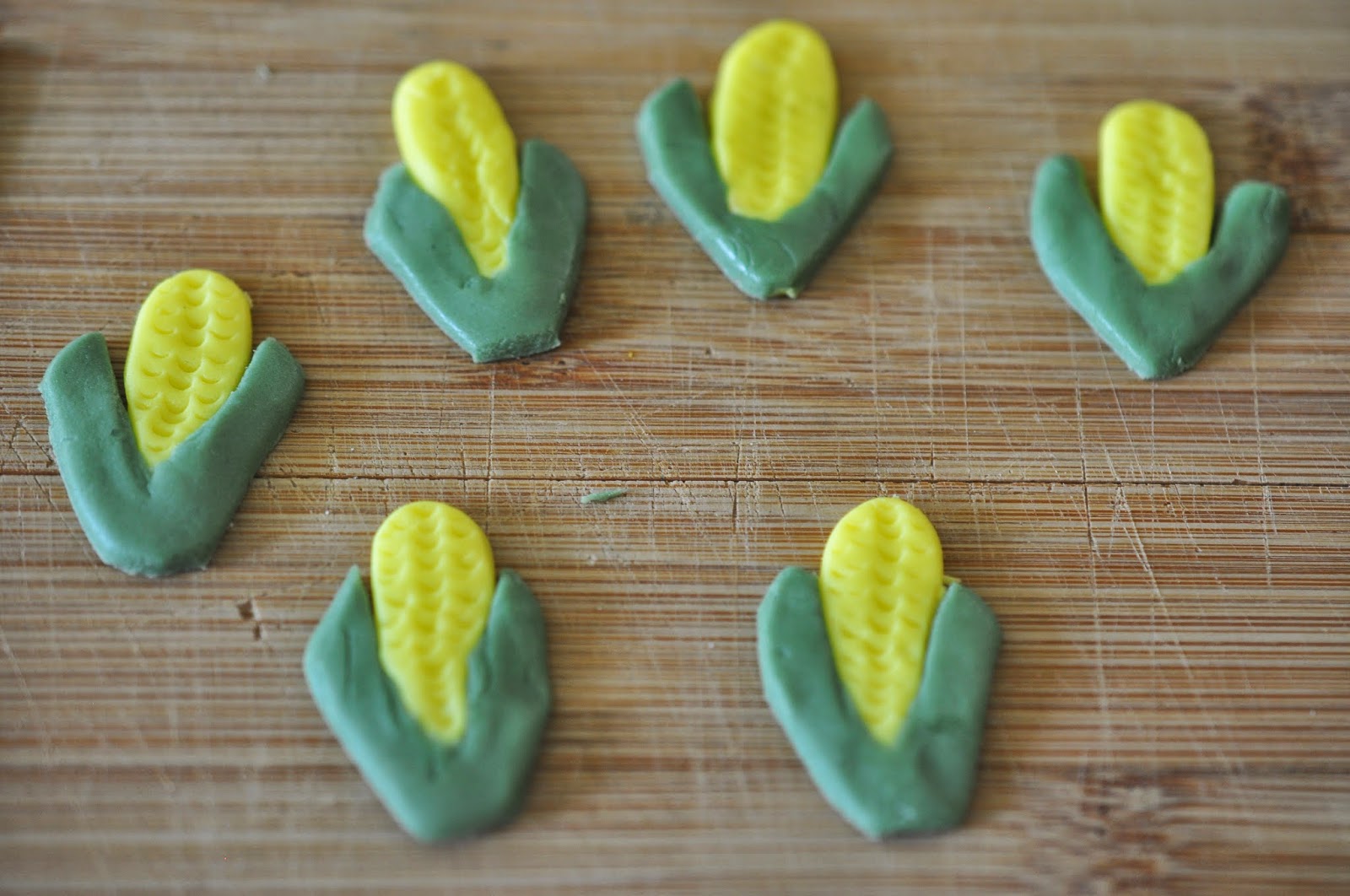 Fondant cupcake toppers all done - giving them a little chance to dry out/harden slightly through the morning.  This was some seriously early cupcake prep - after not getting back to sleep at 5.30am on a Friday where I wasn't working, I decided the only way to be productive that day was to just accept that sleep was done for the day and I might as well start baking! 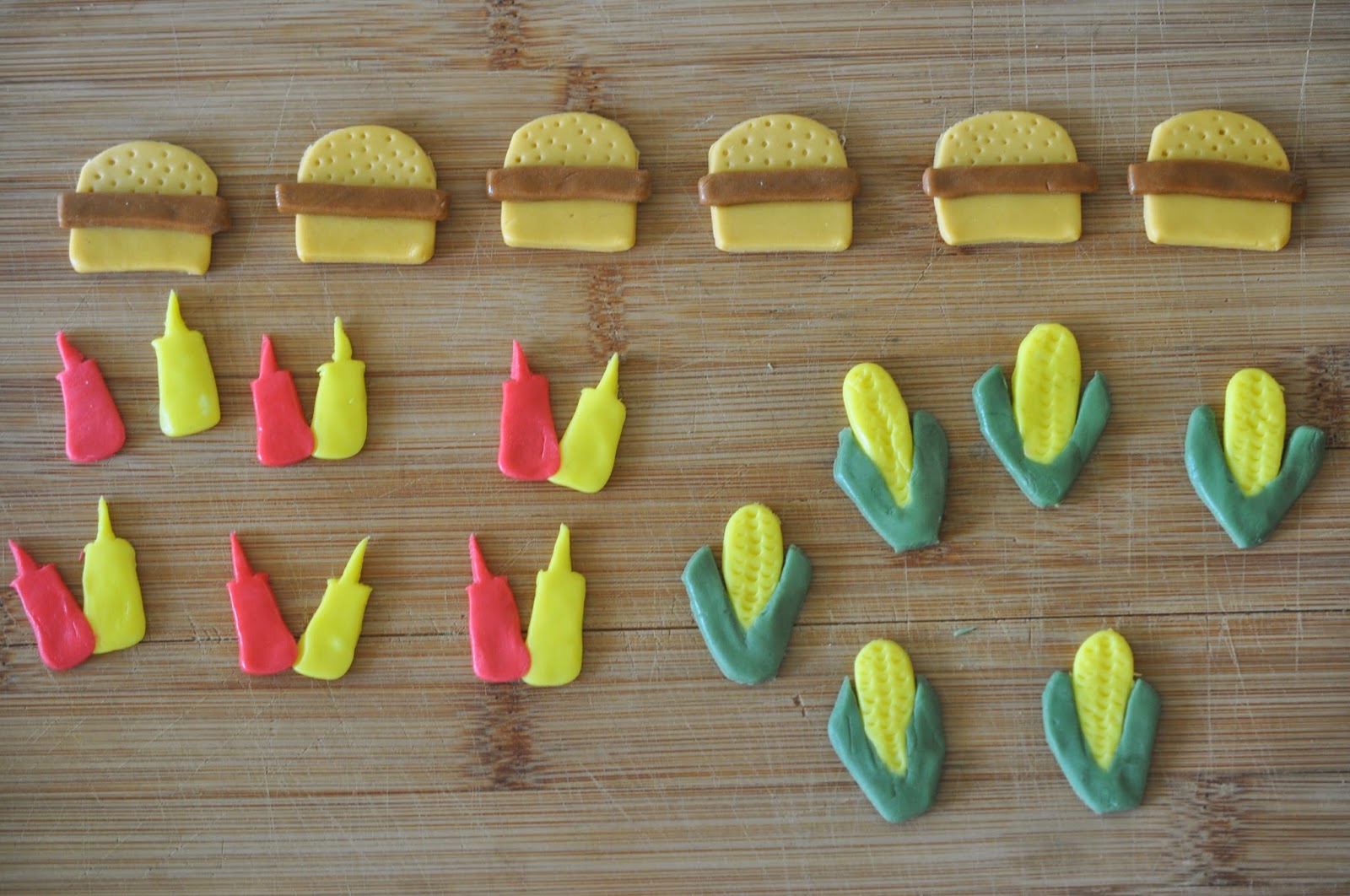 So, with the Coca-Cola cupcakes baked, and cooling, and the glaze deliciously smooth ready to be spread over the cupcakes - see the recipe here - it was time to decorate! 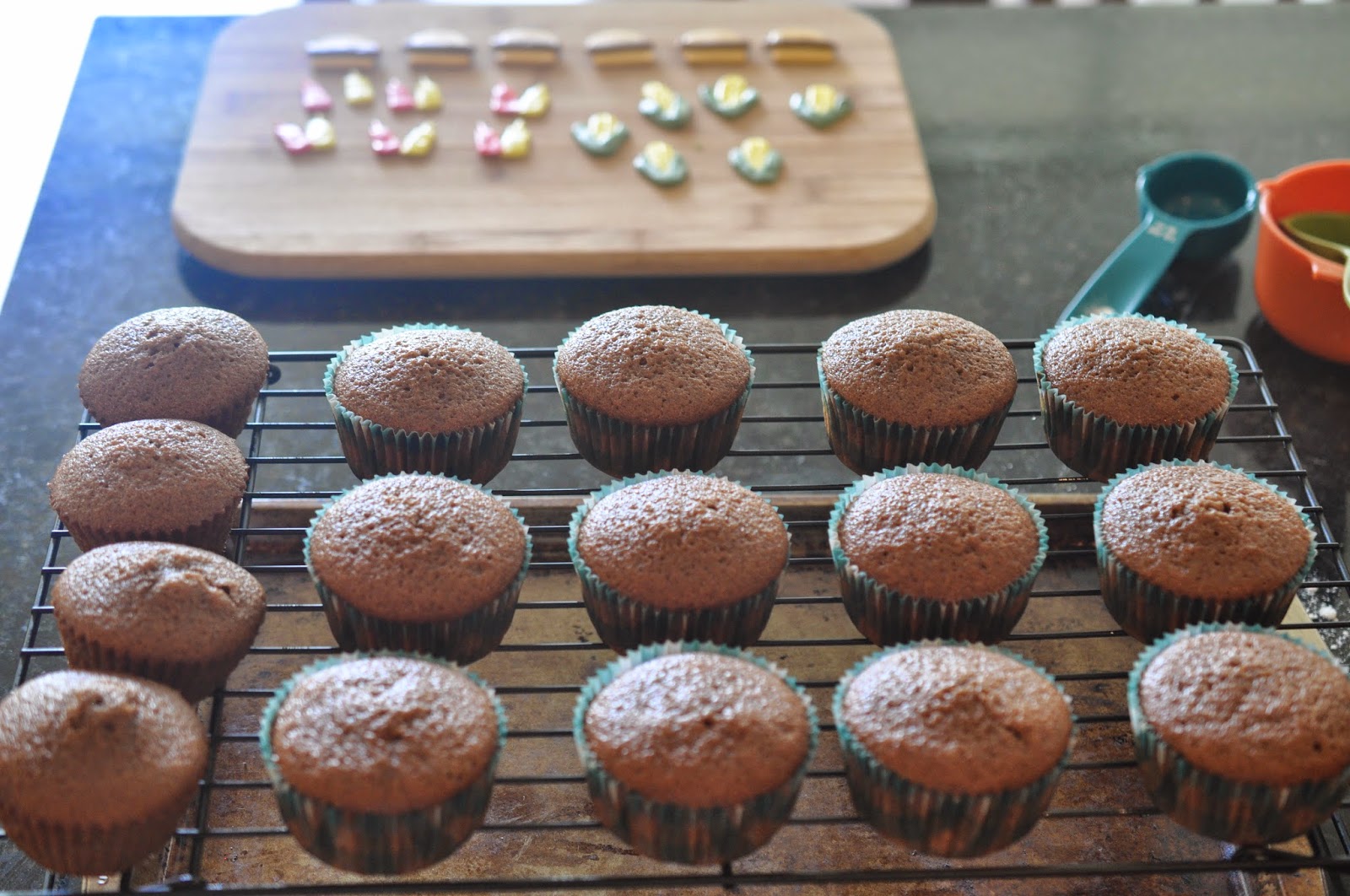 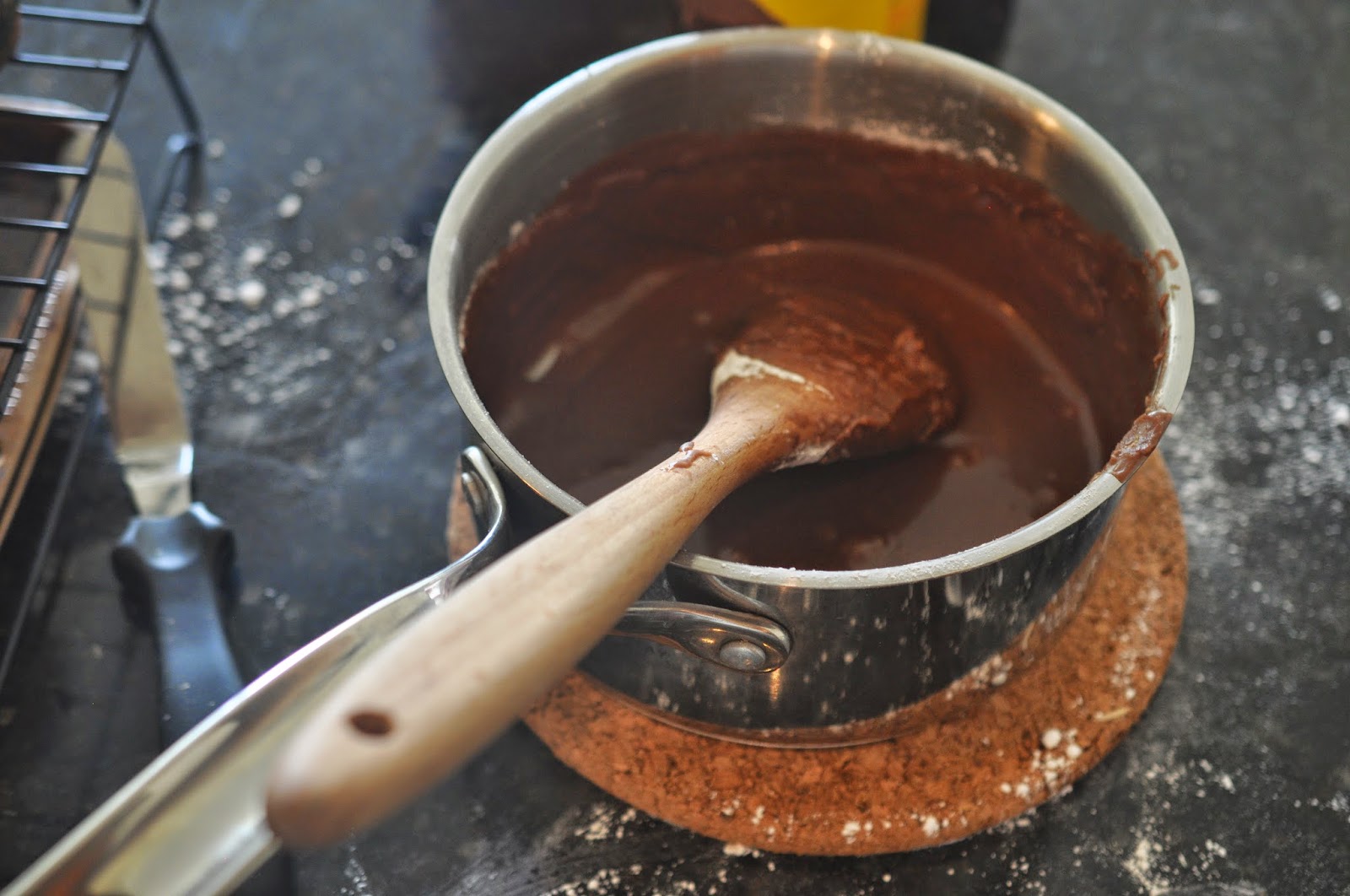 The great thing about decorating with cupcake toppers when they are already made is that, once the cupcakes are baked up, everything is ready to go!  Assembly is nice and easy, and in fact, it made the early baking wake up worth it!

As the recipe is already on an old post, all that is left to share are some close ups of the cupcakes, and more photos! 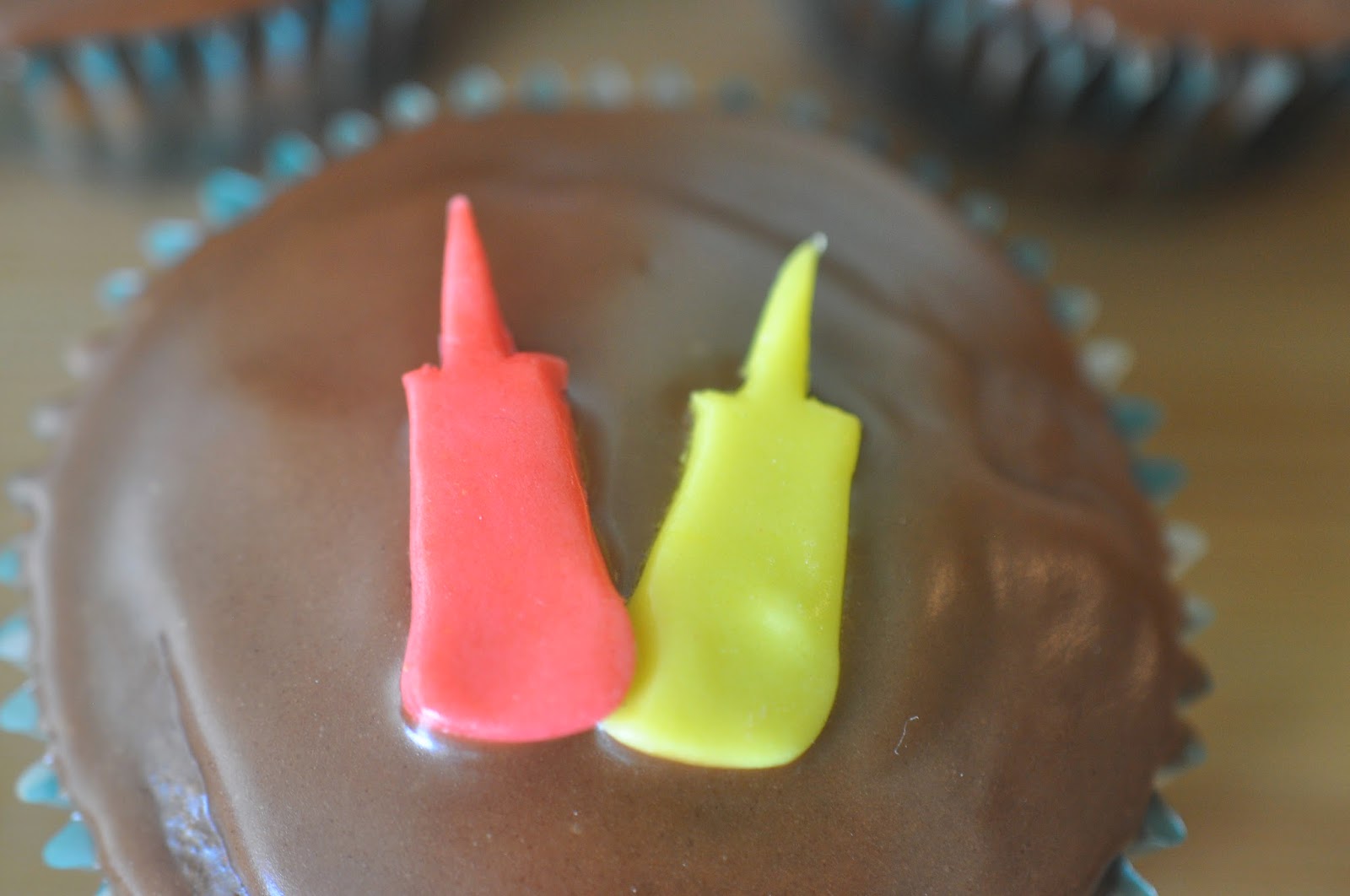 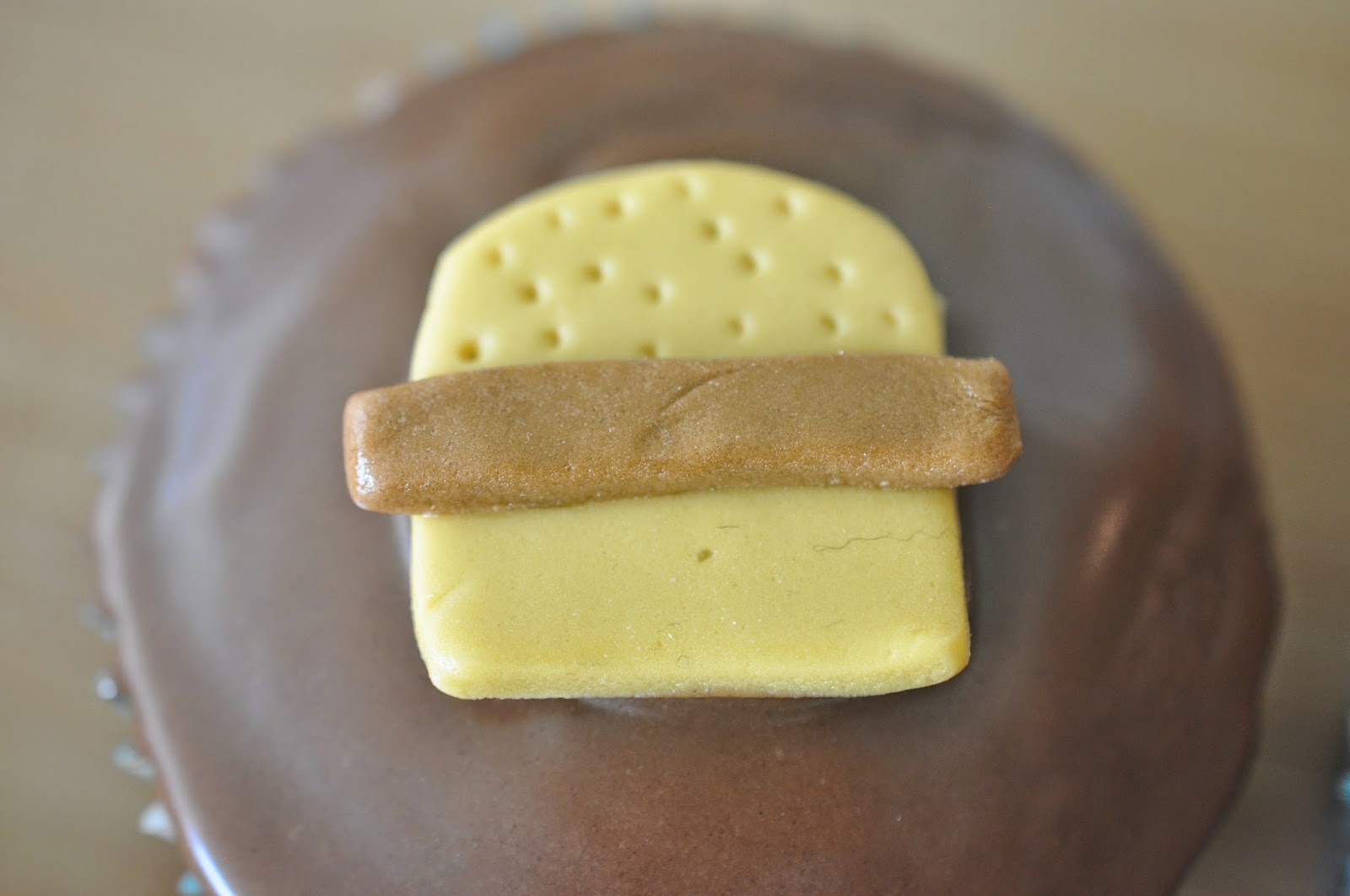 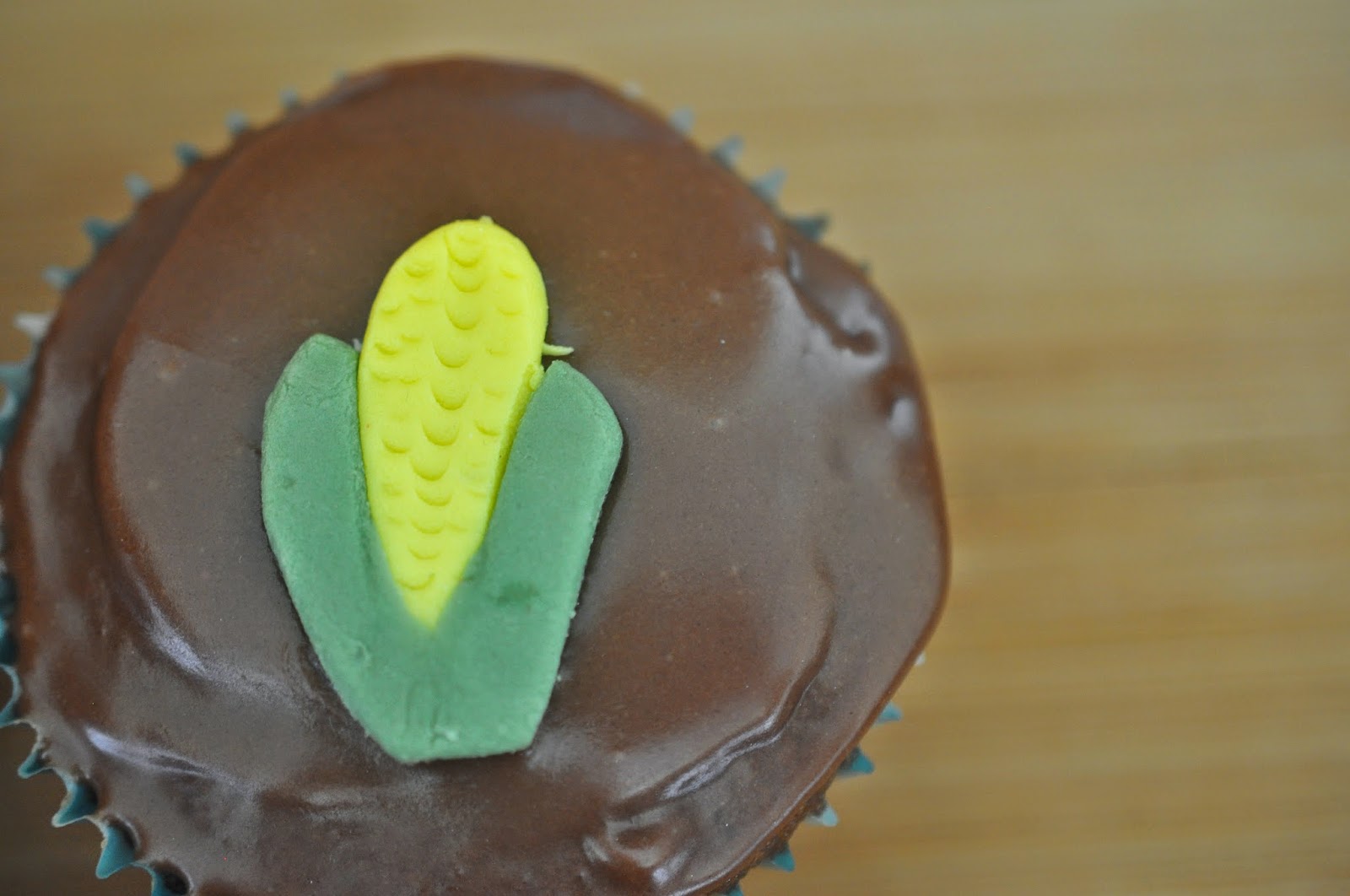 Which is your favourite design of the 3?  I think I still love my original idea of the burger, but I also am really pleased with how the corn turned out! 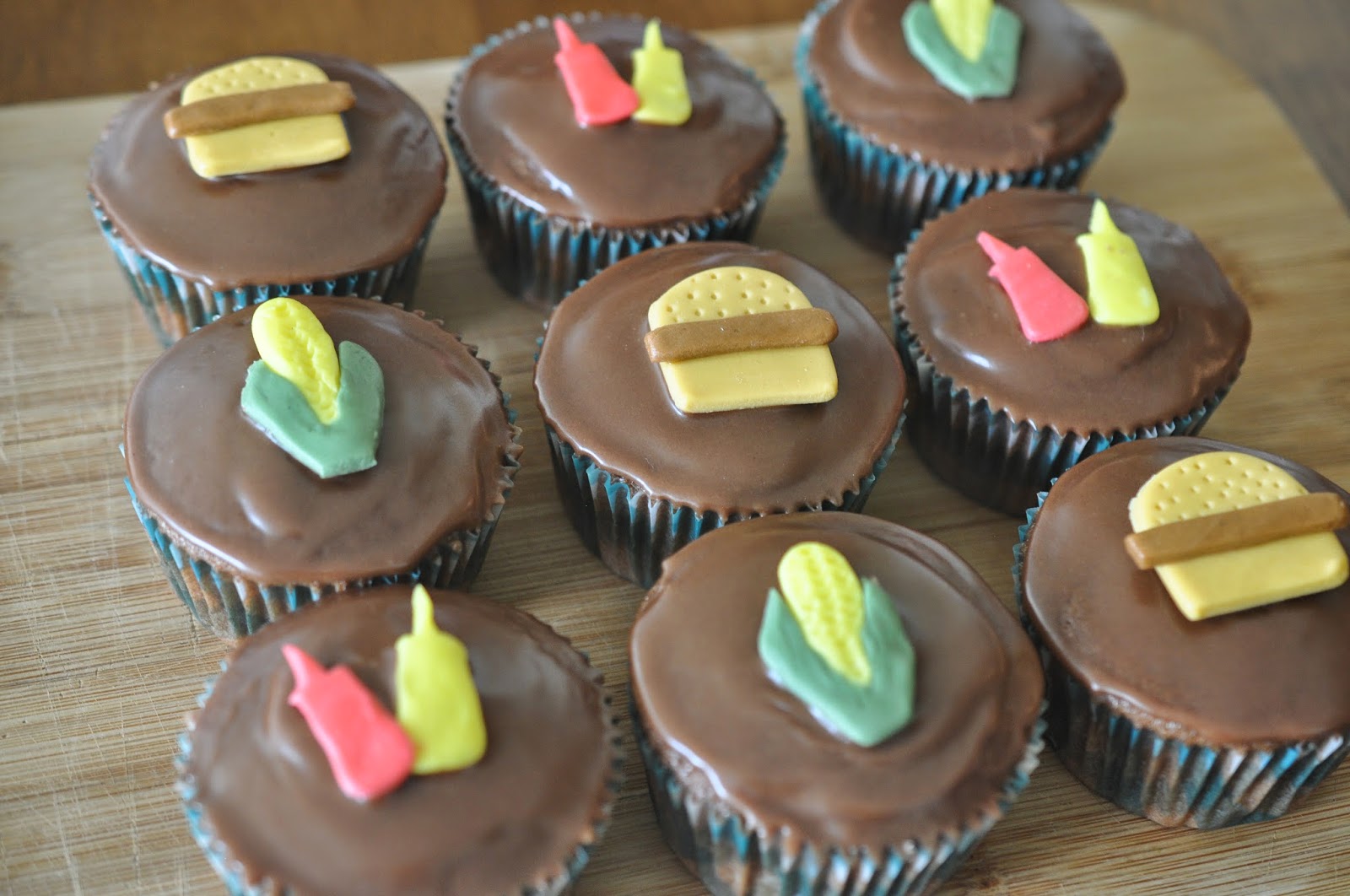 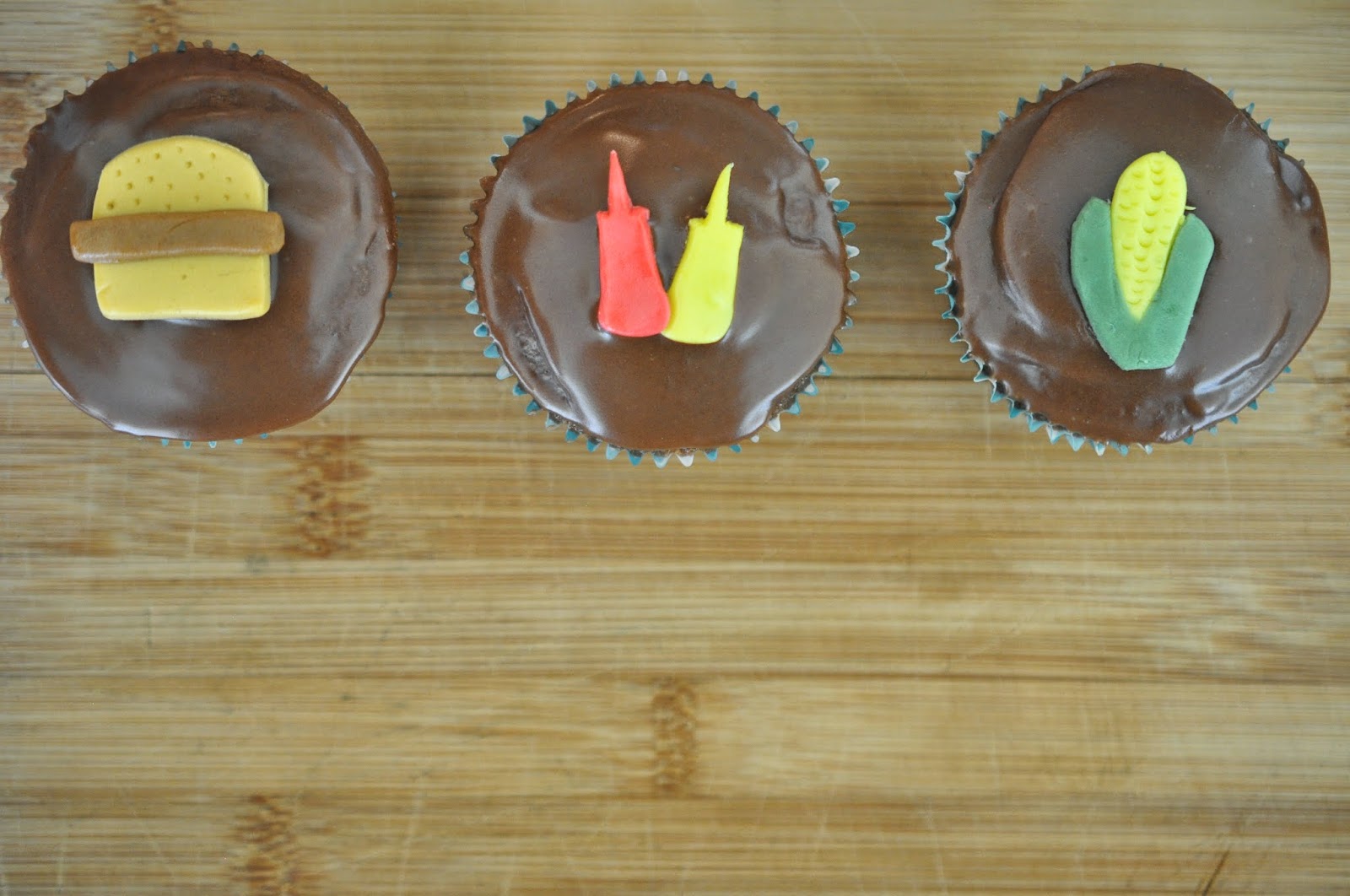 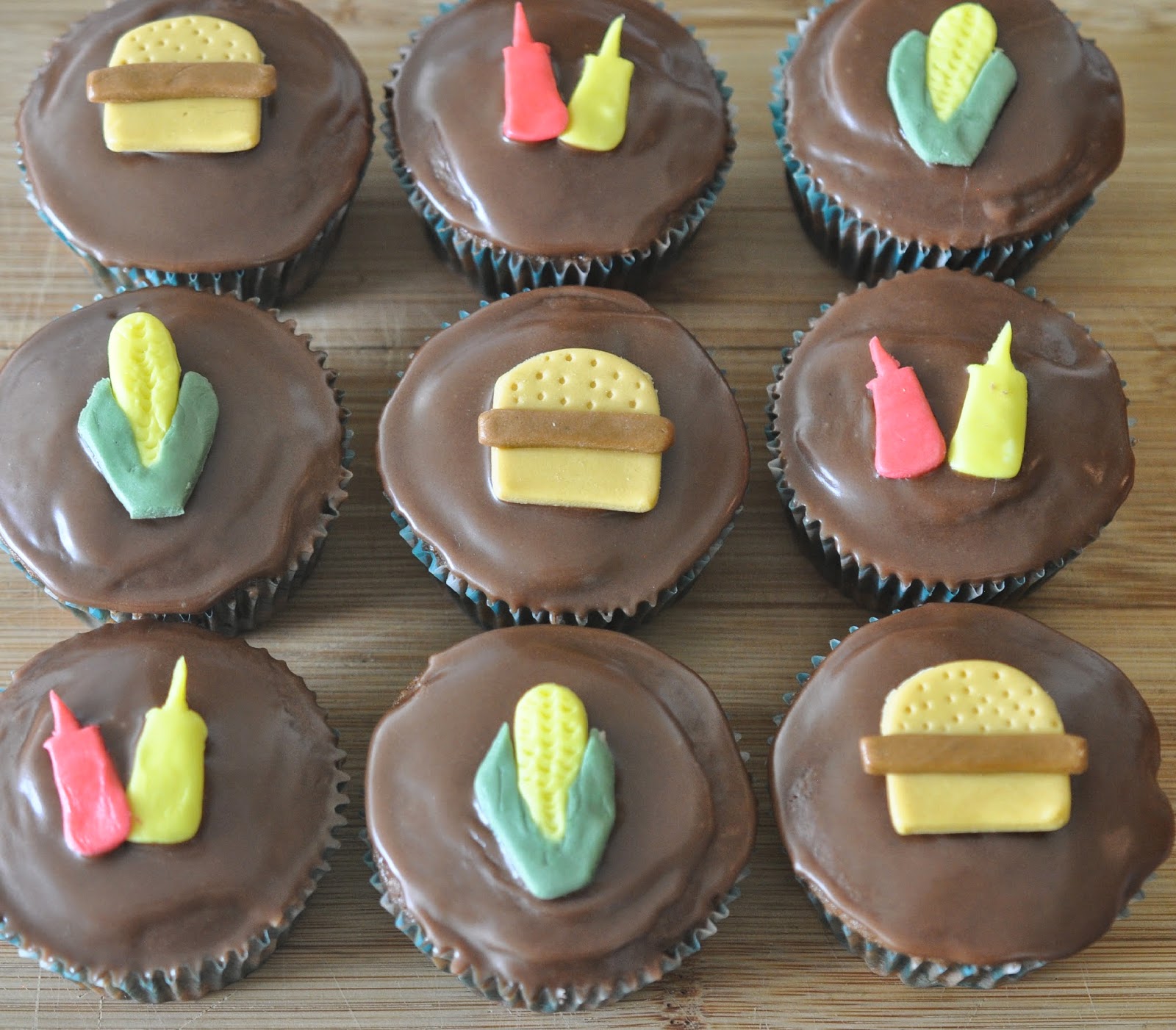 Perhaps you'll give them a bake this weekend for Father's Day, or for a BBQ Birthday coming up this Summer!  Have fun with fondant cupcake topper prep - and then enjoy how easy everything is to put it together once you're done baking :)   I'd love to see your BBQ cupcakes if you try them!!
Happy BBQ Season!!
Posted by Sew Lah Tea Dough at 22:46