A Taste of Britain: Toad in the Hole

One of my favourites being written up for the blog today!  Toad in the Hole!  Delicious sausages cooked in a fluffy batter, crunchy on the outside - soft and doughy on the inside. 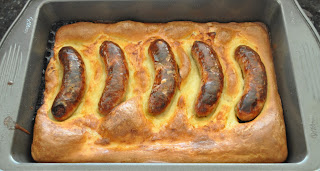 Something that me and my brothers and sisters always used to eat courtesy of my Mum's cooking, and something that I don't eat nearly enough of any more.  The main reason for this is lack of good old English sausages here in Canada.  Now don't get me wrong, they have a lot of kinds of sausages here - Italian, herby, breakfast, maple, and all kinds of hot dogs but I have so far never found quite the right kind of sausage.

Earlier in the week we did a big shop and found these made by President's Choice... English Style Bangers! 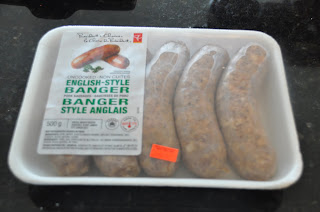 Now I got VERY excited, threw two in the trolley (cart :-P) and carried on my way.  We were thinking of bangers and mash for Thursday's dinner, but instead - when I had a bonus couple of hours I wasn't expecting I got excited to make real dinner for a change and Toad in the Hole came to mind!

Before preparing it, of course I was skeptical about how 'real' these sausages would be... would they cook up the same as the ones I grew up with, would they have the same skin/coating to them... would they even taste the same?! ...

Dubious but Thursday morning rolled around and I prepared the batter for Toad in the Hole.

4oz plain flour (all-purpose)
1 egg
250ml milk (I used 1% as that is what we have usually... you could use higher and proabably get a slightly nicer/richer flavour?)
Pinch of salt

I always remember knowing when it was Toad in the Hole night at home - coming home and already seeing the jug of batter on the kitchen counter, just waiting to be poured over sausages!  So this is what I do too, preparing the batter earlier in the day and then leaving in the fridge - until it is time to cook!

1.  Sift the weighed flour into a jug. 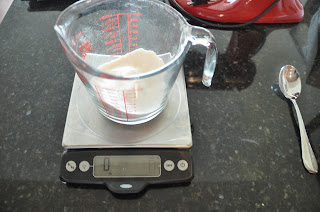 2.  In a separate jug beat the egg into the milk. 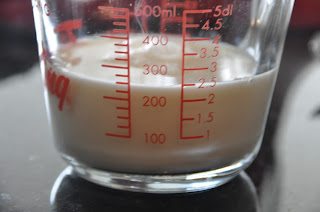 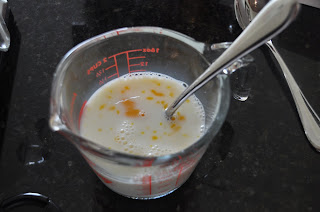 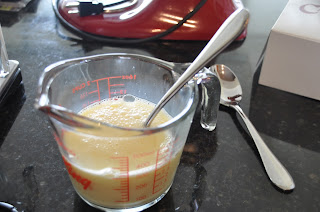 3.  Add the salt.
4.  Gradually add the wet mixture (milk, egg and salt) to the flour.  Use a whisk to incorporate air as you go. 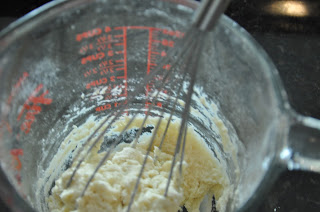 After the first addition of milk to flour it will work into a big clump!  Keep gradually adding the milk, and keep whisking - it will eventually become a smooth, and hopefully lump free batter! 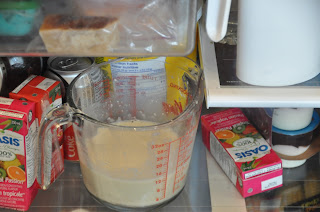 Store the batter in the fridge for at least 30 minutes or however much in advance you have prepared it (probably overnight is max.)

When you're ready to put dinner together...

6.  Preheat your oven to 220°C/ 430°F (hot I know!) and add oil (in hindsight, I actually didn't add enough oil to our dish - the sausages were quite lean and didn't make much of their own fat... this means there wasn't enough grease to help the batter to rise).
7.  When the oil is hot, add your sausages and cook (turning occasionally) for 10 - 15 minutes until browned on the outside. 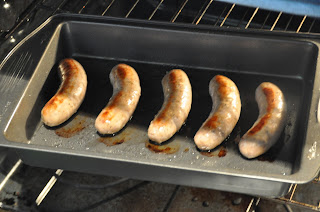 8.  When the sausages are ready, open up the oven and quickly pour the batter over the sausages. 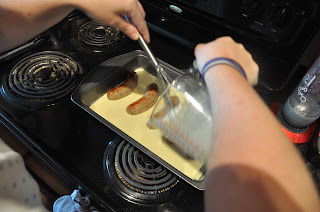 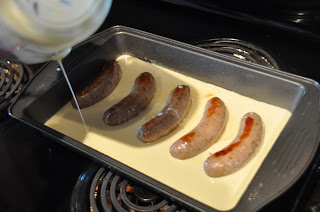 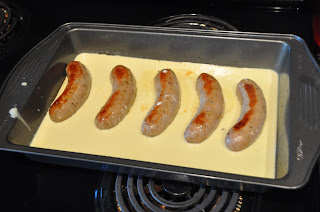 9.  Put back in the oven as quickly as you can and leave in the oven for around 45 minutes.

The batter should rise around the sausages, the edges will be browned but the inside batter still yellow and moist! 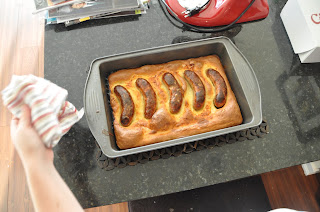 YUM!!!  I'm hungry again just writing about this.  I really do love this dinner, and can't believe it has been so long since we had it.  In fact I think it has been cooked only twice in this house!  One night when we had some friends over for dinner... and another time we cooked Yorkshire Puddings with beef for our Olympic Party.

A few more photos to get your taste buds going!... 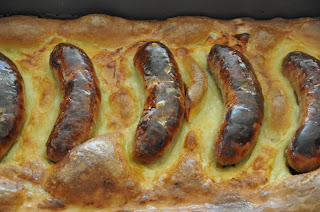 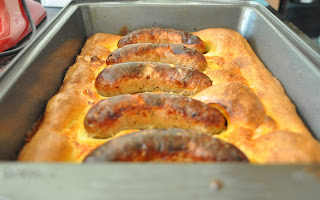 Well it is done now (we finished the leftovers last night), and I can't wait to keep buying these sausages now I have ones that work (they were a great English herby flavour).  Even if they are not quite the same as the 'home' taste, they were really delicious.  My toad in the hole does need a little work - some more piping hot oil in the pan before adding the batter I think would make it rise slightly better and stop some parts of the batter sticking to the pan once it was cooked.  I could probably also bake this in a slightly smaller pan to make the space around the sausages smaller.  This would make the batter rise up and be less wide spread and crunchy.

But, all that being said - still very happy with this meal, and can't wait to make it again - sooner rather than later :)

Even if you're a little skeptical about the title of this dish... why would you want to eat something made of Toad!?  Or perhaps you know the other dish with the same title - an egg cooked in the middle round of toast?!  DO go ahead and try this - you probably have the ingredients for the batter already at home, and if you love sausages as much as I do then please try this out!  SO GOOD! 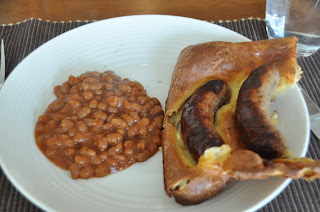 We ate ours with baked beans as we had a tin already open in the fridge... but serve it with a healthier option of peas... gravy for a full roast dinner feeling... or just on it's own with ketchup!