Happy Birthday to Me ~ from my Husband!

Today is the day you see the first ever guest post featured on Sew Lah Tea Dough!  I stayed close to home for the first one, and well, I'm a little biased after all.  Today you get to meet my amazing husband and see the incredible and delicious birthday cake he made for me :-)  I'm the baker in the house, but since we were married I've been lucky enough to have a birthday cake surprise each year!  This year was particularly yummy, and inventive.  I came home from work, not being able to look in the kitchen but smelling some tasty flavours in the air, before being let in on the secret on my birthday-eve.  He even said he had been taking photos as he went along - just like I do when I'm making or baking something I know I will blog about... sooo yes, after all that hard work - he definitely gets to write the blog post for me this week and I'll be back next week!  Ciao for now, and may I introduce the baking version of my husband Jonathan ♥ 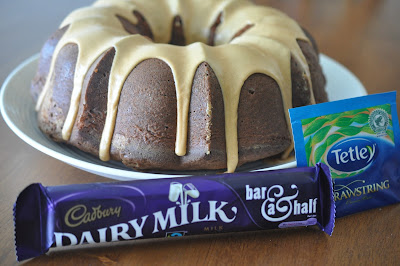 Hello.  I am Jonathan.  I am usually not a baker - at all!  I love to get in the kitchen and cook, but usually that is freestyling, and I'm pretty sure freestyling a cake would basically result in either a puddle of goo or a large hockey puck.  But for Hannah's birthday, I thought it wouldn't really be fair to make her bake her own cake, so I tried to find a recipe and whip something up.

I know Hannah likes chocolate, so I wanted to make a chocolate cake.  Not only that, I wanted to make a cake that has actual real chocolate in the mixture.  You'd think the internet would be full of recipes like this, but if you thought that (like I did), you would be wrong.  Almost all the chocolate cake recipes I found use cocoa powder to chocolatify their batter, so I had to keep searching.  I knew I wanted to use Dairy Milk bars, because Hannah likes it, and because we had a bunch of it left over sitting in a baggie on the counter.  Even the Cadbury website didn't have a recipe I could use.  Finally I found one - on the Hershey chocolate website and decided to use it, but substitute one brand for the other!

1. Heat oven to 350°F.  Grease and flour 10-inch tube pan or 12-cup fluted tube pan. (Make sure you get every inch of the pan greased and floured.  Missing a spot is bad, as we will see later.)
2. Beat butter in large bowl until creamy.  Gradually add granulated sugar, beating on medium speed of mixer until well blended.  Add eggs, one at a time, beating well after each addition.  Add melted chocolate; beat until blended.
3. Stir together flour, baking soda, and salt.  Add to chocolate mixture alternately with buttermilk, beating until blended.  Add syrup and vanilla, beat until blended.  Pour batter into prepared pan.
4. Bake 1 hour and 15 minutes (mine was in for an hour and a half, when I thought it was done, but in the end it was still maybe just under being well done), or until wooden pick inserted in the centre of cake comes out clean.  Cool 10 minutes, remove from pan to wire rack.  Cool completely.  Sift powdered sugar over top (OR make a glaze, like I did!) 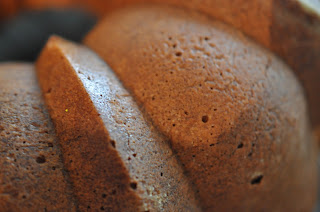 So yes.  That is what I did, with the few changes I made annotated in the recipe.  As I mentioned at the end, I wanted to make some kind of glaze/icing for the cake.  It was already a Bundt cake - not a traditional birthday cake - and I wanted to make it a bit more celebratory.  One of Hannah's favourite things to do with chocolate is to dip it in her tea.  Her best thing is getting a large chocolate Easter egg, breaking it into pieces, an using them to scoop up the tea, letting it melt a bit, and then drinking it.  So what better icing for her chocolate flavoured cake than a tea flavoured glaze!

Again, it was off to google I went.  After looking through a number of different recipes, I ended up finding one for Chocolate Chip Shortbread with Earl Grey Tea Glaze at Good Cooks.  I used this as my jumping off point, but I wanted to make it a 'normal' tea glaze, using Tetley tea bags.  Here is the recipe.

2. In a small bowl, stir together powdered sugar and butter.  Gradually stir in enough tea to make glaze thin enough to drizzle. (DON'T MAKE IT THIN!  I guess this is meant for drizzling over cupcakes, but in this case I wanted it to be poured over and to ooze down the sides of the cake.  I was actually afraid I was leaving it too thick, but it did dribble down nicely.  But you want it quite thick - kind of like molasses.) 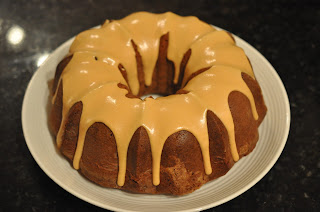 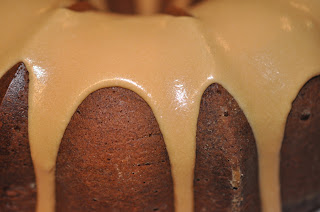 And that's all she wrote... or in my case, 'he wrote'.   Baked the cake, had the heart-stopping experience of trying to turn it out of the pan, had a little bit stick to the pan (grease and flour properly please!), and had a nice gooey glaze drip down the sides.  I think the cake is delicious - I think Hannah does too - and we shared a bit with my two grandmothers who both said it was moist and good.  They kind of didn't believe I had baked it :(  But here's the proof, real life photos!  ... Happy Birthday Hannah! 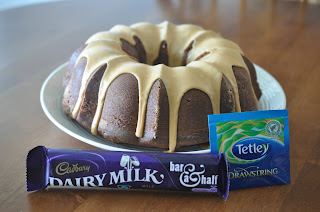 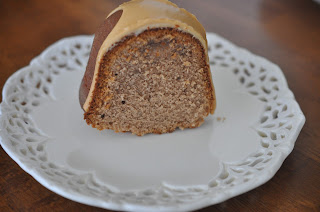 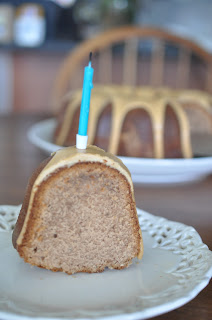 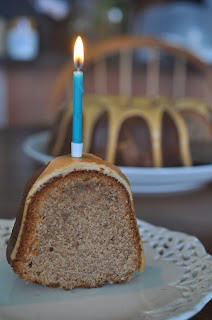 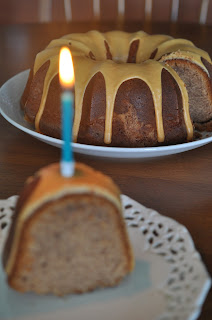