The second Mother's Day of the year is done!!  We had a yummy lunch for my in-laws at our place, prepared with great teamwork between me, my husband and sister-in-law :-)  We had Jonathan's grandmothers over as well, so it was a nice tight squeeze for 7 people around our small round kitchen table in our not huge, but all nice and tidy for the occasion condo!!

We had yummy chicken breasts done on the barbecue - marinated in lemon juice, garlic, sage, honey and olive oil - check out the recipe we used here!  It was a quick phone search in the car on the way to the supermarket, but it was really delicious and flavourful so a good find!!

Accompanying the chicken was my rice salad I blogged about last week and part of that great teamwork - a potato salad brought over by Jonathan's sister.  And at first I wasn't sure that the dessert I wanted to make would be cohesive enough with the light fresh chicken and cold salads but as it turned out Toronto decided to have some serious winds, snow, rain and a frost warning for tonight so perhaps the warm sponge cake with cream was just about right! 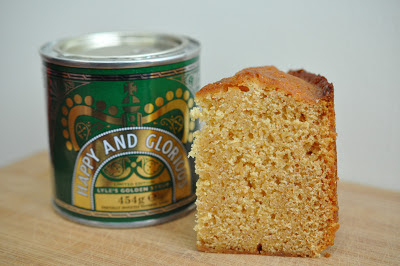 Today marked occasion number 2 in less than two weeks that I baked this Golden Syrup Cake, that's a lot of syrup that has been around here recently. The first time we baked it for our friends who came over for dinner, partial to a sponge cake but without wanting to do the norm I was excited to figure out this recipe.  It seemed like a sticky toffee pudding idea with a twist.

Lyle's Golden Syrup, you are the key player in this recipe, hence you made it into my 'A Taste of Britain' series of blog posts.  And yes, we are ridiculous and bring heavy things like 454g of syrup in a tin back from England - Canada with us.  All because of the 'Happy and Glorious' Queen's Jubilee edition design - but seriously, it is amazing - I love it and although it is now empty I am for sure keeping the tin as a prop for future golden syrup baking blog photographs! 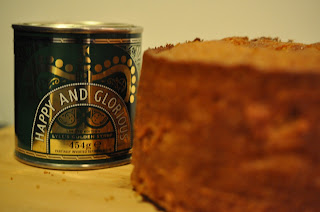 The first time I made this, I actually halved the recipe, and baked it in a 6 inch springform pan but today I did the whole thing in a 9 inch pan, and there is quite a bit leftover!  You could probably also do this in a loaf pan, two sandwiches (mm yum, with a filling inside?!)...oh and also some cupcakes too!  Last night I put a little of the scrapings in a couple of cupcake cases just to see and it worked well too - just need to watch the timing to see when they're done! 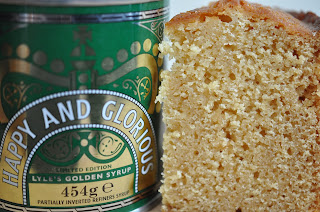 225g unsalted butter
225g light muscovado sugar
450ml Lyle's Golden Syrup - not all Canadian supermarkets sell this, I don't know about in the States but search not only the baking aisle, but also look with the other syrups and spreads!
450g self-raising flour
2 large eggs
300ml whole milk

And one final item the recipe included but I decided to omit was an additional 4 tablespoons of the golden syrup meant for pouring over the warm freshly baked cake - after a little taste of the scrapings I was a little wary of just how sweet it would be and I didn't want it to be sickly sweet and figured I would be serving it warm so if our guests wanted an extra dose of syrup flavour they could pour some on along with the cream! 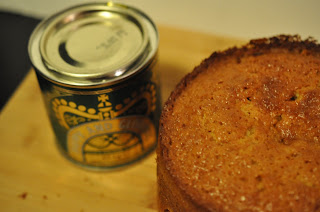 1.  Preheat the oven to 160°C/ 325°F and grease a 30cm cake tin and line with greaseproof paper - again I used a 9 inch springform pan and it was an almost perfect size for the cake to rise without overflowing!

2.  Place the butter, golden syrup and sugar into a large saucepan and heat gently until the ingredients are just melted together, stirring occasionally.  Remove the pan from the hob and leave to cool for 10 minutes.  Really do use a large saucepan... Later on you will be mixing all of the ingredients not in a mixing bowl but in this pan so go big!

3.  Beat the eggs with the milk.  Add the flour and milk/egg mixture to the cooled syrup mixture in the pan and beat steadily with a wooden spoon until smooth and lump free.  At this point I actually 'tempered' the two mixtures - pouring a little of the still warm syrup/sugar/butter mix to the egg/milk first so the warm-cold wasn't too much of a shock for the eggs, and then poured it in as per the recipe.  Watching all these baking shows on tv maybe has paid off :-)

4.  Bake for around 50 minutes (quite a bit longer for the pan I used, wider I guess - I did extra 5 minute intervals, probably looking at 1 hour and 10 minutes in the end).  The cake should be well risen and springy but still very moist.

5.  The step I skipped:  Leave to cool for a few minutes, then pierce the cake all over with a skewer and spoon the extra golden syrup over the top.  Leave to cool completely in the tin. 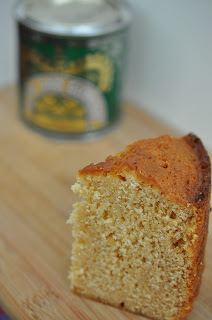 Now I am pretty glad I have no kind of nutritional information on this cake, let's just say there might be quite a few calories per slice, especially having been served with Devonshire clotted cream!!

I left the cake in the springform pan after cooking and then put it back in a low heat oven for 10 - 15 minutes  to warm because isn't thick delicious cream melting slightly over a warm sponge the best way to eat it?!  I think so. 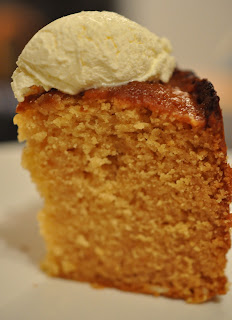 I hope everybody enjoyed Mother's Day lunches, dinners, treats, crafts everything today (or in the UK in March!) :-)  Have a great week!