Easter time!!  I have just finished baking and decorating my second Simnel Cake of the season, cards are made, our home is decorated and we had a LOT of fun making salt dough decorations and painting eggs last night!!  We are well and truly ready for Easter Sunday tomorrow :-)  Unusual for a Saturday I know, but here I am blogging - with all of these fun Easter makes and bakes I have rather a lot to tell you about, so I'll start with the Simnel Cakes today to get your taste buds ready for all of the sweet treats and cakes you'll no doubt be devouring tomorrow! 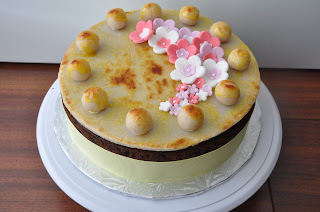 I am super excited this year to have made not only the traditional Easter cake for a family lunch tomorrow but also to have made another last Saturday that I made and decorated in order to sell at my choir's silent auction, fundraising for Festival 500 (Check our choir out here!) .  There were quite a few bidders looking at it and bidding - I started off the bidding at $25 and eventually it crept up to $65 which I am pretty pleased with! Yey!  ... Next step, making and selling them for real, but that's another day.

For this classic cake I used a classic recipe from Delia Smith.  I looked into various different recipes but liked the sound of this one the most - in particular the marzipan chunks that went into the cake, not only in decoration, but INTO the cake mixture!  Yum!

Before the recipe, and the photos I also just wanted to share some of the history of Simnel Cake - a lot of the reason why I love this cake.  Traditionally this cake used to be made in time for Mothering Sunday - the 4th Sunday in Lent (not the Mother's Day of North America in May!)... It is said that young girls in service would make the cake for their mother's when they had the day off to return home for Mothering Sunday.  Should the cake last until Easter Sunday and still taste good they were credited as being a good cook!  And why the marzipan balls on top?  These are the religious symbolism of this traditional cake - the 11 balls on top of the cake represent the 11 Apostles to Jesus at the time of his death and resurrection.  So a little British history in the light fruit and nut cake as well as being a great representation of the Easter story!

So I altered Delia Smith's recipe just slightly, as I used a 9" Springform pan so I will give my ingredients based on what I did (but you can find the original here).  I also did my own decoration, not the woven basket and fondant she did, even though that looked so great as well!

Take half of your marzipan and cut into 1cm cubes.  Toss in 1 tablespoon of the flour.

In a large mixing bowl (I did all this with the stand mixer) sift the flour, baking powder and spice in, then simply place all the ingredients (EXCEPT the marzipan, icing suar, icing, redcurrant jelly and egg yolk) into the bowl.

Mix until it is all perfectly and evenly distributed.  Finally, gently fold in the squares of marzipan and any remaining flour.

Spoon the mixture into the prepared tin (9" round Springform pan, greased and lined with parchment paper - bottom and sides).  Also place parchment paper with a hole the size of a 50p piece on TOP of the cake.

Place cake on the centre shelf of the oven and bake for 2 3/4 - 3 1/4 hours at the lower temperature of 300°F/150°C.  My oven/cake only took 2 1/2 hours so perhaps take a look at yours after that time too!   The cake is cooked when the centre feels springy when lightly pressed.

When it is cooked, leave it in the tin for 30 minutes before turning it out onto a wire rack to cool.

I firstly attached the cake to the silver 10" board with royal icing (Egg white and icing sugar whisked until desired thickness).  Also turn on the grill (broiler) ready for later...

Dust working surface with icing sugar and roll out rest of marzipan until you have around 1/4 - 1/2 inch thick 9"round of marzipan.  I use the bottom of my springform pan to measure this and then a pizza cutter to cut around it.

With remaining marzipan roll out 11 x 10g balls.  I did these one at a time weighing as I went... I REALLY wanted these all to look the same, can you tell?!

Glue these around the cake with a small amount of royal icing.

Beat the egg yolk and spread on top of the marzipan.

Now the nervy part!  Place the cake on a baking sheet and put under the grill and WATCH LIKE CRAZY! The first time I did this last week I was under the impression it would take less than a minute - Delia suggests only 30 seconds under the grill... I literally don't think I breathed that whole time.  Alas, perhaps my centre of the oven was not close enough, or maybe a gas oven gives off more direct - I don't know.  What I do know is I was looking at around 4 minutes to get a golden brown lightly toasted look to my marzipan.

Get to work on your fondant flowers (or any other decoration you like....if any) while you leave this to cool down and re-set. 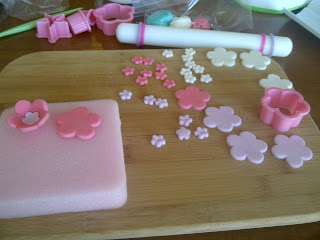 I coloured some Wilton fondant and made some small flowers and some even tinier ones, glued with royal icing and arranged in a kind of cascading effect around the inside of the cake.  But of course you can do any number of different decorations, just google image search Simnel cake - you'll see nests with mini eggs, baskets, the fuzzy yellow chicks placed on top, or simply just the marzipan and balls!  The possibilities are endless you could say! 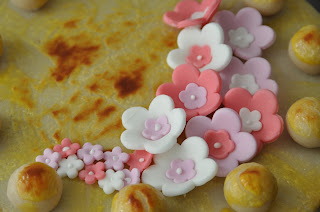 I'm excited to eat and share this tomorrow and had a LOT of fun making it.  Have a fantastic long weekend everybody, I'll be back tomorrow with more Easter blogging! 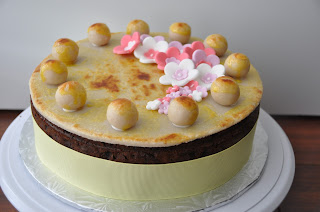 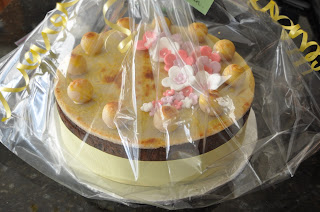 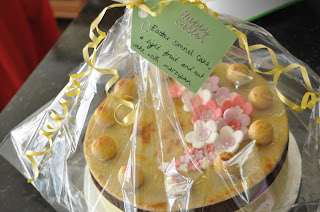