It's your Birthday and it's the Super Bowl!!

A BIG Happy Birthday today to my husband Jonathan who is lucky enough to have his birthday on Super Bowl Sunday for real this year!

We're celebrating with his family and watching the game later on, but here's a quick post to let you know what cake we'll be eating!

After last year's Game Night birthday cake I was wondering what I could do this year... Cue some crazy ideas way above my station and off I went!  I was drawing ideas for days, planning the flavours of cake and the buttercream fillings... My ideas are definitely TOO crazy sometimes and there are things I should probably realise I cannot get done on a Saturday after work in the morning, with a music birthday party for a 3 year old in the afternoon, but alas - Sunday morning has arrived and I am still alive and did get 6 hours sleep! 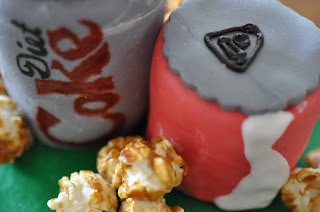 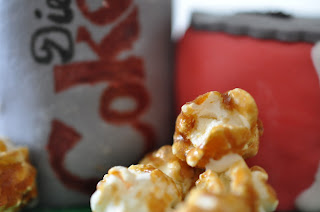 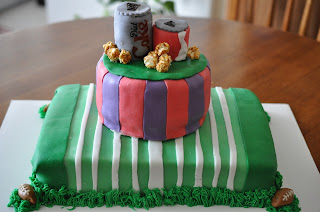 A basic run-down on the flavours before I go...

I promise to write about the recipes I used later on and add in some links, but for now there's a birthday party to get to!!


Hi again, some updates on recipes and what was what now the craziness of a birthday filled weekend is over!

For the bottom layer that made up the Super Bowl field I used Red Velvet Cake that came from the Joy of Baking blog here.  I have always used this recipe, many times before and love it.  It is dense, moist and just so good!  Never needed any other recipe.  I thought this would be a great cake for the bottom layer of the cake to make sure it was sturdy enough to hold tiers on top of it.

I filled the cake with regular vanilla buttercream, a ratio of 300g icing sugar and 175g butter but double or triple depending on how much you need, and pure vanilla essence to taste - around a teaspoon for that amount.

For decoration I used Wilton fondant and did a LOT of rolling out!  I coloured most of it light green but then added a dark green touchdown strip, and then white strips, slightly thicker for the 50 yard line and then thinner ones for the other yard lines.  Originally I planned on writing the numbers on the cake as well but once it was done I decided to leave it as it already was quite full of stuff and didn't want to overcrowd the cake!

Tier number two was the Vanilla cake that also had vanilla syrup through it making it also nice and dense and very moist and yummy.  Find that recipe here from BBC's Good Food.  I always prefer using grams to cup recipes and I KNOW I can trust a British recipe for this :-)  I cooked it in a 6-inch springform pan and it required a little less time than it suggested but just keep an eye on it!

I filled this one with more of that vanilla buttercream, but to this one I also added glace cherries - halved and placed on top of the buttercream filling.  Jonathan LOVES cherries so this was all for him!

To cover this one I coloured the fondant icing with red and blue/purple and cut them into strips for the team colours for this year's Super Bowl.  And hey, researching this meant I now knew who was playing!

To top of the cake I made 2 coke cans out of Chocolate Victoria Sponge - which I wouldn't use again not for the recipe, which was yummy but tooooo spongey and soft to work easily with.

I filled this one with Salted Caramel Buttercream and of course I have lots left over because I just made 2 cans using my empire cookie cutter but it tasted good, nice and sweet!

I covered the taller can with grey tinted icing and the smaller coke can with more of the red fondant icing.  To create the can look I used food writing markers to do the Diet Coke font and then used white writing icing to colour in the swooshy line for the Coca-Cola effect.

Finishing touches was the popcorn around the top edge (Coke and Popcorn - it's the Super Bowl right?!)... the grass piped green buttercream using my grass tip and piping bag... and some brown all fondant superbowls with white chocolate writing icing pen stitching :-)

A BIG project, maybe my biggest and best fondant cake yet!  Half was eaten up at the party last night, just enough left to enjoy just the two of us this week!!